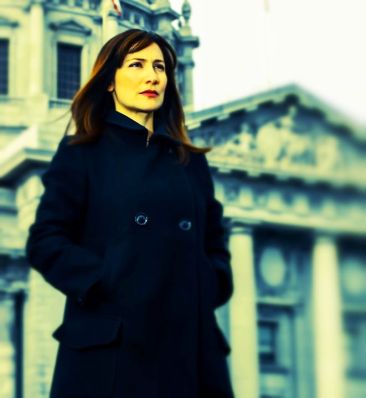 (Theatre) – An autobiographical  story about an immigrant woman, her marriage, the challenges of adapting to a new country, and how a private matter became a scandal in and out of San Francisco’s political and media circles.

The first time I saw actress Eliana Lopez perform “What is the Scandal?” I was moved. The actress was playing herself as the main character in one of those public situations nobody wants to be part of –because your private life comes out and to the eyes and biases of everybody else’s. She was telling her story. She did it with candor, daringly speaking about of her truth and her views of the things that happened. She did it with humour and did a great job portraying several characters in a short time, jumping from being herself, her friend, a political figure, and more. She proves herself an actress, but inevitable and because this is so personal, a hint of this painful experience shows up from time to time.

More importantly, she brought perspective, clarification, and facts. A point of view from someone who lived what others saw and heard of, mostly through the media who scrutinized certain aspects in the life of former San Francisco Sheriff Ross Mirkarimi, who had also been prominent liberal member of the San Francisco Board of Supervisors.

From that first night last year at the Mission Center for Latino Arts in San Francisco’s Mission District, the play has matured, and it is now on a 2016 multi-city tour . The play written and directed by Alfonso Lopez (her brother), the solo performance by Eliana of course, and all things production by Yvette Agudelo (her sister-in-law.)

“Eliana’s performance has been well-received every city we have visited. People outside San Francisco did not know about the case but after hearing it, they feel connected,” says producer Agudelo. “It can be challenging going on tour, but doors are opening, and we are considering a proposition to make a movie.”

The woman is powerful, the actress is very good, and the storytelling keeps the audience captive.

To see a review of this performance first time in San Francisco, please click here: A powerful revisit to a scandal in the city