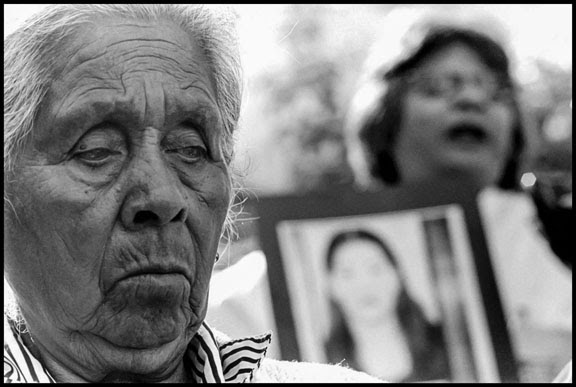 Fermina, the mother of a disappeared maquiladora worker, marched in one of the many protests over the murder of women in Juarez.

CIUDAD JUAREZ, CHIHUAHUA — After more than a decade of silence, maquiladora workers in Ciudad Juarez have found their voice.  The city, just across the Rio Grande from El Paso, Texas, is now the center of a growing rebellion of laborers in the border factories.  At the gates to four plants, including a huge 5000-worker Foxconn complex, they have set up encampments, or “plantons,” demanding recognition of independent unions, and protesting firings and reprisals.

“We just got so tired of the insults, the bad treatment and low wages, that we woke up,” explains Carlos Serrano, a leader of the revolt at Foxconn’s Scientific Atlanta facility.  “We don’t really know what’s going to happen now, and we’re facing companies that are very powerful and have a lot of money.  But what’s clear is that we are going to continue.  We’re not going to stop.”

The Juarez protests come just as Congress gets ready to debate a new trade treaty, the Trans Pacific Partnership, which opponents charge will reproduce the same devastation Mexican workers experienced as a result of the North American Free Trade Agreement.  Critics charge NAFTA cemented into place a regime of low wages, labor violations and violence on the border after it took effect in 1994.  Today, economic pressure has become so extreme that Juarez’ workers feel they have no choice but to risk their jobs in hope of change.

Ali Lopez, a single mother at the planton outside the ADC CommScope factory, describes grinding poverty. “The only way a single mother can survive here is with help from family or friends,” she says.  Lopez has two daughters, one 13 and one 6 years old.  “I can’t spend any time with them because I’m always working.  When I leave in the morning, I leave food for the older one to warm up for lunch.  Childcare would cost 200 pesos a week or more, so I can’t afford it.”

A cold winter has already descended on Ciudad Juarez, close to freezing at night.  Parents worry that children at home alone with a heater for warmth risk fire in highly flammable homes of cardboard or castoff pallets from factories.  “We just have enough money to eat soup and beans,” she explains.  “We don’t eat meat.”  Lopez’ wage is 600 pesos a week (about $36).  “No one can live on this.  A fair wage would be 250 pesos a day.  In the U.S. people make in one hour what it takes us all day to earn.” 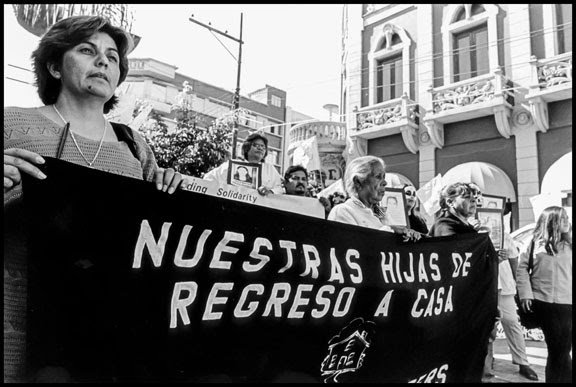 Rosario Acosta and other mothers march behind the banner of the group they organized:  “Nuestras Hija de Regreso a Casa” – “May Our Daughters Come Home”

This new workers’ movement began last August.  At Foxconn, people started talking in the bathrooms, at lunch and on the lines.  Anger over conditions quickly started to rise.  Operators on the line there make 650 pesos/week (about $39).  A family with kids, according to Serrano, needs 700-800 just for food.  A gallon of milk in Juarez costs the same as it does in El Paso, on the other side of the Rio Grande.

“Some foremen would tell young women that they had a good body, and demand to go out with them,” Serrano adds.  “If they didn’t, they’d call the women lazy or burros or good for nothing.  If the women went to Human Relations, the harassment still didn’t stop.”  In order to survive, some women were putting in two shifts, back to back, or even working three days straight through.  When they protested harassment, overtime was cut off, he says.

At CommScope, supervisors charged 50 pesos a week to put someone’s name on the list for overtime, charges Cuauhtemoc Estrada, lawyer for the workers in the plantons.  “They felt so humiliated that some would break into tears.” According to Raul Garcia, a CommScope worker, those who protested were sent to a special work area known as “the prison,” or simply, “hell.”  Older or slower workers were sent to another, called “the junkyard,” where they were humiliated and ridiculed.

On September 16, Mexico’s National Day, a group of 190 CommScope workers went to the local labor authorities, the Conciliation and Arbitration Board, and filed a request for a “registro,” or legal status, for a union.   According to Garcia, the new union’s general secretary, the company then started cutting overtime.  Some married couples had been working different shifts, so that each could be home to take care of children.  Managers reassigned them to the same shift, forcing one to quit.  Finally, 171 workers were fired on October 19.  The terminated workers then organized a permanent planton at the factory gates. 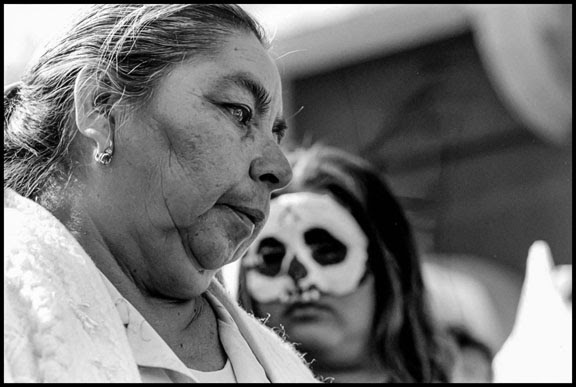 At Foxconn workers also asked for a registro for their own union in September.  The labor board set up meetings with company managers to discuss their grievances.   “The managers agreed to do small things, like reinstate the ’employee of the month,'” Serrano recalls.  “But on the big issues like wages and mistreatment, they just promised to do something next year.”

Workers organized a demonstration at the gates to pressure Foxconn.  When managers threatened them, the demonstration went on for a week.  The company filed a civil suit for damages against its own workers, and in mid-October the firings began there also.  Serrano was the first, and by the end of the month 110 people had been terminated.  On November 2 they set up a planton, and have been living at the gate ever since.  “They’re treating us like criminals,” he says, “but we’re workers who have been there for many years.  They have to reinstate us, and the government has to give us our registro.”

Neither Foxconn nor CommScope responded to interview requests, but Rick Aspan, vice-president of corporate communications for Commscope told Frontera Norte Sur, a news site published at the Center for Latin American and Border Studies at New Mexico State University in Las Cruces, “We terminated fewer than ten people from the facility recently,” for violating company rules.

Plantons have now spread to two other maquiladoras – a Lexmark factory making ink cartridges, and an Eaton Corporation auto parts plant.  Lexmark workers just filed their own request for a union registro.

This insurgent wave threatens the established economic order in one of the main centers of maquiladora production on the border.  Even as Mexico continues to feel the impact of the U.S. recession, Juarez still has more than 330 plants employing more than 178,000 workers.  By U.S. standards, many are huge.  Foxconn’s two factories employ over 11,000 people.  CommScope employs 3000, and Lexmark 2800. 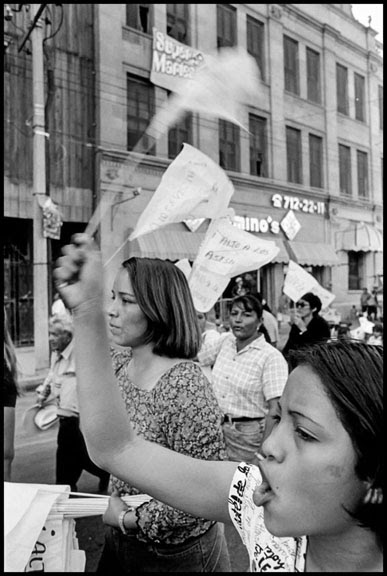 Companies are attracted to the border because of low wages and lax enforcement of labor and environmental laws.  In 2013, the minimum wage in Juarez was less than 65 pesos a day (today about $3.88).

At the beginning of the NAFTA era, this low wage system was challenged by several attempts to organize independent unions.  In 1993 a partnership between the Mexican labor federation, the Authentic Labor Front (FAT) and the U.S. union, the United Electrical Workers, mounted a campaign at the General Electric factory, Compania Armadora.  Workers were fired, but pressure from UE members in U.S. plants forced GE to rehire several of them.  Nevertheless, the FAT lost the election that would have given it the right to negotiate a contract.

Other worker protests took place in the same period.  At Clarostat, a division of Allen Bradley Corp. (now Rockwell Automation) workers tried unsuccessfully to organize to raise wages.  When one of them, Alma Molina, was fired and then tried to get a job at a GE plant, a manager told her that her name was on a blacklist.

Worker activism of the period was fueled by a wave of birth defects.  Between 1988 and 1992, 163 Juarez children were born with anencephaly – without brains – an extremely rare disorder.  Health critics charged that the defects were due to exposure to toxic chemicals in the factories or because of their discharges. 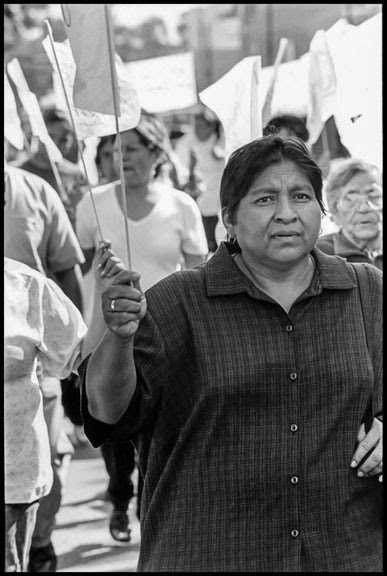 In the mid-1990s Mexican and U.S. unions cooperated in opening a Center for Labor Studies to help educate workers about their rights.  It focused on the three factories owned by Lear Industries, which supplies car seats to General Motors.  Lear still employs over 7,700 people in Juarez.

“When I was being hired, after the interview, they asked me when I would have my next period,” one worker explained.  “They said I couldn’t actually start work until I had my period.  On the first day of my period, I came back.  The nurse was there, and she said, ‘Let’s see it, show me the sanitary napkin.’  They accepted me that same day.”

CETLAC director Guillermina Solis charged at the time that companies didn’t want to hire pregnant women, and even fired women when they become pregnant, in order to avoid government-mandated maternity benefits.  Her allegations were supported by the Women’s Rights Project of Human Rights Watch.

Juarez’ worker activism of the 1990s, however, declined as the city’s women became victims of a notorious series of mass murders that terrorized them for a decade.  By February 2005 over 370 women had been murdered since 1993.  In 2010 alone 247 women were murdered, and between January and August of the following year, another 130.

The mothers of Juarez organized despite the terror to fight for the lives of their daughters.  They charged that larger social forces are responsible for creating a climate of extreme violence against women.  Juarez has become a huge metropolis built on the labor of tens of thousands of young women, overwhelmingly migrants, who have traveled north from cities, small villages, and rural areas in central and southern Mexico.

“While the city and its industry depend on them totally, they are important only as productive workers, not as human beings,” Rosario Acosta, mother of one of the disappeared women, explained in a 2003 interview.  “We’ve opened the big door, our border to the U.S., in order to allow big multinationals to settle in our city.  We give them a permit to do absolutely anything.  They don’t have to guarantee the most elementary aspects of life, from wages women can live on, to basic service in our communities, or even just security.” 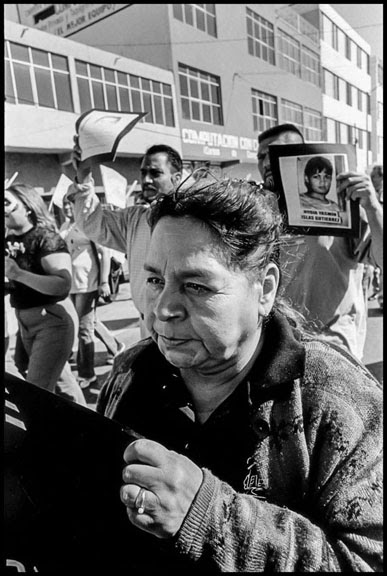 Residents of the border are treated as throwaway people, whether they’re factory laborers in the plants, or barrio residents living along dirt roads, in cardboard houses with no sewers, running water or electricity.  According to Julia Monarrez Fragoso, a professor at Tijuana’s College of the Northern Border (COLEF) “the practices of the maquiladora industry towards the workers reveal a consume and dispose cycle.”

This new wave of worker protests, therefore, is breaking the fear and terror that has gripped working-class neighborhoods for over a decade.  Elizabeth Flores, director of the Pastoral Center for Workers for the past 15 years, says “each week a woman comes through our center looking for her daughter. At the same time, parents have lost hope that any better future awaits their children other than a job in the maquiladora.  And young people themselves don’t want to go to work there.  Spend their lives – for what?”

Nevertheless, she says, “People are tired of the abuse, which has been terrible.  They had to lose their fear to protest, but desperation and anger are potent antidotes to fear.”

This year the business community of Juarez is celebrating 50 years of the Border Industrial Program, which opened the door to the maquiladora boom.  In that time, two and a half generations of workers have passed through the plants.  “They were always the fundamental part of production,” concludes Cuauhtemoc Estrada.  “But the global economic model imposed on us by free trade meant the objective was always producing the most at the lowest cost.  Now we see the result.  And as difficult as it may be, workers are determined to change it.” 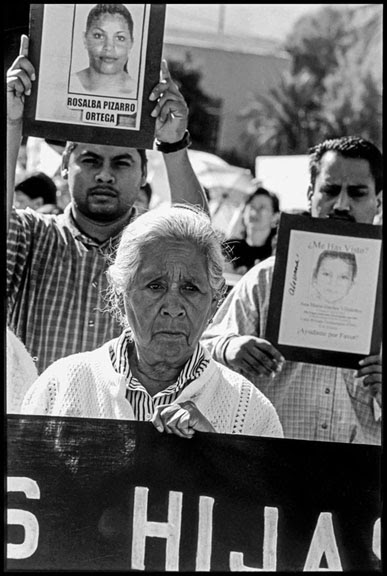 Reposted with the author’s permission. 2015.