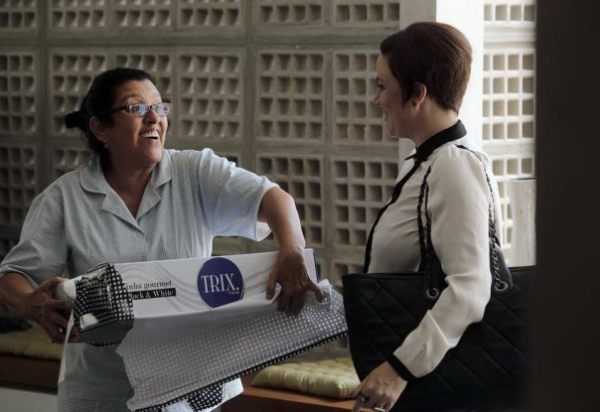 A woman leaves her town and her daughter to make a living in Sao Paulo, Brazil, as the live-in nanny and housekeeper in the mansion of a wealthy family. Years later, after helping their Dr. Carlos and Doña Barbara raise their only son, Fabhino, her daughter comes to Sao Paulo too, causing all kinds of unexpected troubles.

It may cause audiences all kinds of unexpected feelings as well, as it presents the ways we’ve come to believe and create certain realities, many of us accepting that without questioning its validity.

Released this year, The Second Mother is a story about social status, and the linessome people aren’t supposed to cross. Written and directed by Anna Muylaert, it has already gained two awards, one at the Sundance Festival and other one in Berlin.

The way Regina Case portraits Val, the main character is phenomenal, and Val, pardon redundancy, is such a character. Val is as emotionally intelligent and caring, as ingenuous and stubbornly trapped by the rules of social class. Regina Case makes her as vividly witty and funny and hilarious as only Regina can make her. The subtleties of classes and clashes are presented very well by each one of the other characters. The story goes as life goes in Brazil, the rest of Latin America, and the rest of the world.

The film is in Portuguese with English Subtitles. It starts September 4 at the Landmark theaters in San Francisco and Berkeley, Camera in San Jose, and at the Christopher B. Smith Rafael Film Center in San Rafael.

Val will win your heart. The film may remind you perhaps of yourself or certain others you’ve seen around, as the lines that define social status are part of our daily lives. At the end, it will soften you up. I would say you must watch this movie.